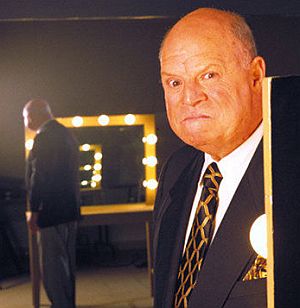 Don Rickles is playing intermittent dates at the Orleans. He is the master of politically incorrect insults, and he insults everyone...wonderfully. The things that he says are so wrong according to all decent sense and sensibility, and it is hilarious. Rickles is a classic performer, and he has no equal.

First and foremost, Rickles is an entertainer. He sings, he dances, and he makes us laugh. Time has done little to slow this man down. In fact, he seems sharper and quicker than ever, and the age seems to make everything even funnier. Rickles looks the part of a happy grandfather, but acts the part of being intolerant of everything.

The bulk of his time is spent talking with the audience--coming up with one quip after another. Each line seems to be tailor made for that person, and the audience eats it up. When in doubt, he abuses the orchestra. Everything that is said, and everything that is seen is fodder for Rickles fire.

Warming up the audience prior to Rickles appearance is Gene Ferrari--a dedicated and long time lounge singer. Ferrari does his job and does it well. As a singer, he doesn't compete with Rickles act, and as a warm up act, he is perfect. Ferrari, though, does more than just get the audience used to laughing and clapping. Ferrari also shines in his own light. His wonderful and powerful voice truly inspires the audience. It is awesome to see a "warm up" act get a standing ovation and heartening to feel the sincere humbleness and honesty with which he accepts his applause. Ferrari knows that the audience is not there to see him. He is not there to take anything away from Don Rickles. He is only there to augment the evening, which he does...wonderfully.

A real orchestra--such a rarity in this town now that it is worth mentioning, backs up the show. There are many references in the show to the "old" Las Vegas, and how it used to be. Some things are better, of course; and some things are worse, but one of the greatest travesties is the decline of the live orchestra. It was good to see one and hear one once again. They are good musicians.

Don Rickles only comes to town for a few days here and a few days there any more, but when he is here, you should go and see him. He is an original. He is a classic. You see and appreciate the talents of a true entertainer, and you wonder where the multi-talented people are today. There is no one who can fill this man's shoes, so you need to go see this man.