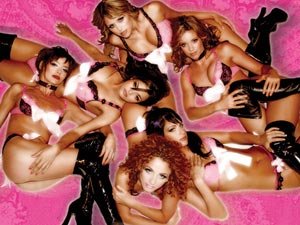 "X" has had an interesting evolution. The once cutting edge topless show suffered through a host of legal troubles and venue changes. It has disappeared and resurrected itself a number of times. This latest version is the most significant makeover of the show since its inception. More than half of the numbers are new, with a new cast, and a new setting.

It is sometimes hard to understand...the show seems to have all of the right elements for success, but it's not a great show. The women of the cast are beautiful. They are all great dancers. They look good, and they move well. Enrique Lugo choreographed the new numbers...I've known Enrique for years, and I know what a talented and brilliant choreographer he is. So why, after thirty minutes, is the audience looking at their watches wondering why the show feels so long? The production has the potential of achieving something incredible, but somewhere along the line, it falls short.

One of the problems of the show is the lighting. The generalized wash of lights from the front and the distracting video projected on the sides and on the dancers makes almost every number feel exactly the same. There is no mood; there is no shape, isolation, or atmosphere. This feeling of "sameness" pervades the entire production and works its way into tedium. There is one number that breaks this mold, and that is the "Bathtub" scene...which is from the original production, but it does show that the space is capable of something more interesting that just a wash of lights. Whoever did the lights for this show needs to be fired.

There is also a Stripper pole that is set out in the middle of the audience. This would be great if we got to see some good pole dancing, but instead the dancers seemed to just dance with the pole rather than do anything that would be considered pole dancing. If something like a pole is set up in the middle of the audience, it better be used and used well.

Also, the direction of the show did not seem to take the space into consideration. There is the stage that is raised about three feet up and then the flat audience seating area. This causes problems...anything that is done on the floor is completely lost by anyone more than two chairs back, and there is a lot of floor work done in this show. There might have been some incredible things going on, but the bulk of the audience couldn't see it.

A comedian broke up the evening. He is a good comic, but there is the feeling that he is in this production at the wrong place at the wrong time. I don't believe that anyone really wanted to hear stand-up comedy at that time---especially with no transition. He just seemed completely out of place. He belonged in a different production. It would have been different if we had seen him for more than that one moment on stage. If he had been our host for the evening, he could have established a rapport with us, and he would have been wonderful. I have seen this show several times with several comics, and the spot has never worked.

"X, Burlesque" does have potential. All of the pieces seem to be in place. The cast is talented, and there is a lot of creativity, but the show definitely needs some work.