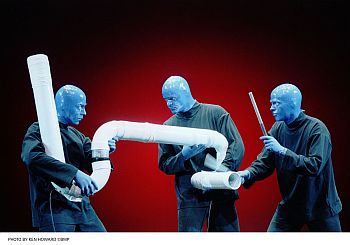 Note: Now Playing at the Monte Carlo "The Blue Man Group" is performing inside the showroom at the Venetian Hotel and Casino. The show has become one of the Vegas "standards"---one of those shows that you simply must see while you’re in town. It is a multi-media, sensory experience that will go beyond your expectations. In many ways, this production defies the traditional concept of a "show", and brings it to the level of an experience.

"The Blue Man Group" opened at the Luxor in Las Vegas at the beginning of the year 2000. The ability for this show to succeed in this town was very questionable at first, but with persistence (and Intel commercials) the show has grown a good reputation and a strong following. This success prompted an increased show schedule, and now, a move to the Venetian with a custom built theatre and even more seating.

The Blue Man Group was founded in 1987 where they first made waves in the underground performance art scene in New York City. In Early 1991, The Blue Man Group premiered "Tubes" at La MaMa Experimental Theatre Club on the Lower East side of New York City. The indescribable combination of theatre production, concert, and sketch comedy was a hit, and by the end of the year they had moved to the Astor Place Theatre. They won the Village Voice OBIE Award (Off-Broadway Theatre's highest honor) for the year of 1990-91.

Other than a couple of different segments, the show really hasn’t changed from the version at the Luxor. It is a strict adherence to form and function that is usually the death knell to a production, but here, rather than bring about stagnation, it continues to be engaging. The show is a lot of fun to watch.

As far as the show...what is it about? Well, there is a trio of blue men who do things. Often times these things are extraordinary. Other times they just do things that are ordinary, but they have the capacity to make the ordinary extraordinary. I don't know that I will ever be able to chew cereal or eat a Twinkie in the same way.

The Blue men are a well synchronized group. Their reactions are uniquely in unison, and yet, each member maintains their individualism. The Blue men have the unique ability to appear as if they are strangers from another planet, experiencing things for the very first time, as well as, masterful and thoughtful aliens sharing knowledge and experience with us. The audience is a very important part of the performance. We are continually acknowledged throughout the show, and often times, a significant part of it.

The new showroom at the Venetian---while beautiful, does not make the show better. In fact, because of the cavern like size of the space, the show loses its intimacy. It is a shame. One of the best aspects of the show was the involvement and interaction. It is the aspect that gained the show its notoriety and built its reputation. That is all gone now. The Blue Man Group is a good production. It is a wonderful mix of art, music, thought, sight, touch, words, and sounds. It is a sensory experience that, in the final evaluation, is something that should be experienced rather than watched.