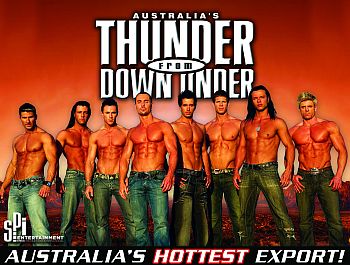 "The Thunder from Down Under" has been operating for a couple of decades. In that time, the group has been able to entertain women on a global scale and has become the most successful male revue in the world, and they have brought their success to Las Vegas, as well. As soon as they opened, they were an immediate success. Shortly after the "Thunder" opened at the Frontier, three other male revues open in Las Vegas hoping to cash in on that same success. Lots of showrooms have been vying for this group and were only waiting until their one-year contract at the Frontier expired.

This All-Male Revue is Australia's answer to the Chippendale Dancers, and is certainly, just as well received. This bevy of buff male bodies bounds across the stage in this 75-minute tease to all of the female audience members. It is a party. It is a romp. Every night is a fantasy bachelorette party, and it is certainly a "Girl's Night out." These men know how to work their audience and do a good job at making all of the women absolutely crazy.

This show is really an amazing phenomenon. It is a smart reply, reaction and answer to all of the topless female shows and strip clubs that are so prevalent in Las Vegas. I am sure that for a long time now, women have been saying, "What's out there for me?" The "Thunder" is that answer to all of that. Enthusiastic female audience members are lining the walls to see this show, and they are not being disappointed by what they see inside.

The men of "The Thunder from Down Under" do a good job at working and teasing their audiences. They don't reveal themselves all at once, but tease these women with a finely timed incremental removal of clothing--keeping the audience begging for more. They play with a couple of fantasy characters, and it doesn't hurt one bit that each of these men are good looking enough to intimidate even the most secure males. The female audiences also allow themselves to cut loose and have a good time. You don't see this sort of enthusiasm at strip clubs for men. Even the most shy and demure women seemed to get into the act.

As a production, the show has many flaws. There is not enough variation in the choreography, and these men are certainly not dancers. These are really good-looking guys that simply move well. On the other hand, no one cared about any of these things because everyone had such a good time.

The performers create a great atmosphere in the showroom. It is a party atmosphere in which everyone gets to play and have fun. It is the friendly Aussie charm that permeates the room.

"The Thunder from Down Under" is a fun show. It is obviously geared to and for women. If you are a man that happens to get dragged to this show, sit back and enjoy watching these women simply go insane.