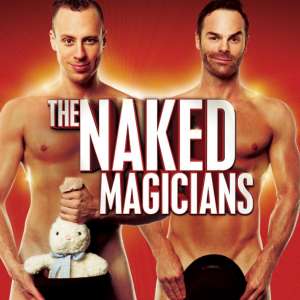 "The Naked Magicians" are playing inside the Brad Garrett Comedy Club at the MGM Hotel. Comedy magicians Mike Tyler and Christopher Wayne put on an entertaining evening with this R-rated show.

The show is well placed in the Comedy Club; this is really a comedy show. The magic is more of a vehicle that propels their comedy forward. Tyler and Wayne are funny, quick witted and keep the audience laughing. They build a great rapport with the audience. Their pace and timing are masterful. They are adept comedians.

The magic...well, it's exceedingly basic stuff, and if you've never seen versions of these tricks, then you haven't been paying attentions... The patter that accompanies each of the illusions extends the tricks to such a degree that in the ninety minute show; they only manage to accomplish half dozen tricks or so. The magic is not the point of the production.

Then there is the "naked" part of the show...It's not quite what one would expect. First of all, when they come out to open the show...they're dressed. But they do explain that the nakedness will be progressive, and so it is. I believe that the audience wanted to see a greater portion of the show with the pair being naked, but they do not disappoint. By the end, they are indeed naked...kept modest with the use of their hats.

"The Naked Magicians" is a fun show. There are a lot of laughs and fun to be had...just roll with it. It's comedy...and some magic, too.