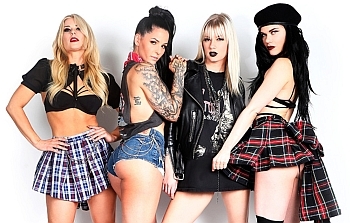 Little Miss Nasty is playing inside the Night Owl showroom at Hooters. It is self described as "a Rock 'n' Roll Burlesque for the 21st-century." Unfortunately, it comes across as a heavy metal dance recital, and sadly, this dance studio only has four students...so they have to do everything. Now I have no problem with these four performers. They were great. They did a great job. They worked hard, moved well, and executed the choreography wonderfully. Unfortunately, it wasn't enough to save this production.

The biggest problem with the show is that the production has no personality. There is no connection or rapport with the audience. No attempt is made to establish that relationship. One audience member is gratuitously brought on stage at one point, but it didn't go anywhere.

The show is broken up into three sections. The first act is the heavy-metal dance recital. It seemed they just played Rob Zombie type music and danced for 30 minutes. The performer's basic outfit was black lingerie with accessories added. They played with militaristic themes and pseudo-religious themes, and I'm sure that there was a story behind each of these numbers, but that message and story did not translate to the audience.

After the first act, there was a 10 minute pause while stagehands removed a three pole apparatus from the stage.

The second act was better than the first. It had a much of greater variety of classic rock 'n' roll music. The first part was mostly parochial schoolgirl outfits and then later they changed to their Daisy Dukes. But again...it followed the same formula...just one song after another...no real progression...it was all pretty much the same... The second act was also 30 minutes.

Video accompanied each number. Some of it worked...and some of it didn't. The producers actually took time to shoot and put together some good video and actually augmented the numbers...but they only did it for a few numbers... Most of the time, it is a huge distraction and took away focus from the dancers. It was apparent that they felt that they had to have something for each number...even if it was just shock background clips. The producers needed to learn that sometimes you should turn the video off.

Lack of theme and variation killed this production...it never built to anything. At the end of the last number...the show stopped. ...but I could pay more money to have my picture taken with the dancers...

I left the showroom quite perturbed... If I had paid for this ticket, I would have demanded my money back. I can't believe that they are charging money for this show. This production would work fine as free entertainment on Fremont Street...you could be entertained for a couple of numbers and then walk away.