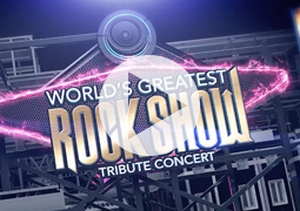 "The World's Greatest Rock Show" is playing in the showroom at the Stratosphere. It's a Rock Legends Tribute Concert that entertains Vegas audiences with the dream rock concert they thought was never possible. This live rock music extravaganza transports the audience to a time and place where you can witness incredible renditions of the signature songs so closely identified with these immortal entertainers - from the 60s to the 90s. Relive classic anthems from KISS, Bruce Springsteen, Journey, Heart, Meatloaf, and Van Halen.

It is a good show, but it is an odd show...it brings together peripheral tribute artists that may not get a lot of work otherwise. The rock show tribute has been the latest craze in the Vegas entertainment scene. In the last couple of years, at least six have opened and run their course. These shows normally focus on the biggest stars in the industry (i.e. Michael Jackson, Elvis, etc.) This show does not...which I really appreciate.

Like I said, it is an odd mixture for people. Each of these tribute artists is top notch, and I feel that the production team first found the quality artists out there, and then built the show (rather than the other way around)...but it works.

I really can't imagine how much regular work these tribute artists get. I can see the KISS artists getting regular work, but Heart? Meatloaf? Van Halen?

Is it the "World's Greatest Rock Show?" No, of course not; but it does offer a clear alternative...and let's face it...it may be the greatest rock show for someone.

With all these tribute artists, it certainly makes for a very large cast. A cast size that makes me question if it is sustainable. It will take a lot of great ticket sales for the company to make its weekly budget. I would encourage people to go to this sooner rather than later.

The show features an all-new LED wall, great lighting, video screens, and a stellar assembly of musicians, actors and dancers. It is produced and directed by "Las Vegas Walk of Stars" recipient, veteran producer Dick Feeney and Darin Feinstein, founder of Red Mercury Entertainment. Sing along to your favorite rock hits of all time. The World's Greatest Rock Show will perform six nights a week.