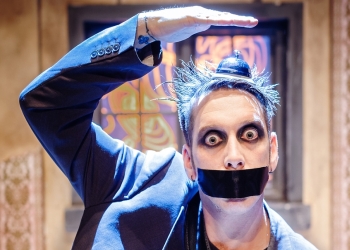 "Tape Face," is playing inside the Cabaret Theater at the Flamingo Hotel & Casino. Tape Face was a finalist on the 11th season of America's Got Talent and is part of the latest trend of people from that show that has landed and opened a show in Vegas. And while his act is amusing, cute, and oftentimes clever; it is a real stretch to keep the audience engaged for a full hour. He is a great variety act...not so much a headliner.

Tape Face, whose real name is Sam Wills, comes from Canterbury, New Zealand. He originally performed as "The Boy with Tape on his Face," which is now shortened to be a bit more hip and contemporary. He is very reminiscent of a Parisian street clown utilizing mime and interaction to entertain. Tape Face aims to be delightful, wry, and many-layered, with the ability to transcend the barriers of language and culture.

I say it again...he is a great variety act. He would be perfect in a 5 to 7 minute slot between the numbers of a bigger show. As a solo performer, he does not have the range to sustain a full hour. There are no big moments of the show...no rising action, no climax, and no real dynamics. I do give him kudos...he is charming and clever, and I hope he is able to ride this wave of TV notoriety and gain huge success. I like him...but he is not a headliner.

90% of his act is "interactive"...which means that he uses people from the audience. He probably pulled 20 or so people up on stage through various points of the production. Mostly, they were silly interactions with the bulk of the comedy coming through his nonverbal instructions being misinterpreted. In many ways, it looked like an extended episode of "Stupid Human Tricks."

What has happened to Vegas entertainment? It seems that a requirement for any new show is having had TV exposure...and then people come to these shows to see what they've already seen. Tape Face recreates everything that he did on America's Got Talent and does not offer that much new material. Didn't we used to go to shows to see things that we've never seen before? We currently have 7 to 10 shows that have AGT talent.

But this type of show is attractive to casinos. First of all...they're cheap. One person, no set, no costumes, no fancy lighting, and inexpensive props. Second, they come with a built in audience. Tape Face was in front of 14 million people when he was on America's Got Talent...and some of those people became big fans. Sadly, the entertainment value of the show is not generally a factor to the casinos. The only question is, will it make money? The casinos even price these shows at what some might consider being dishonest pricing. General admission is about $65...which I think is outrageous, but in truth, these tickets are priced so that they can be discounted. There are coupons everywhere, and the discount ticket outlets will have lots of these tickets. Of course, for the real fan, VIP tickets are for sale at just over $100...and I'm not really sure what that gets you...other than a more expensive ticket.

For the fans of Tape Face, this will be a good show. It is a small theater, so every seat puts you close to the performer.