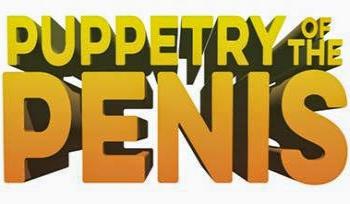 "Puppetry of the Penis" is playing in the Jewel Box Theater at the Erotic Heritage Museum. Basically, it's two naked guys playing with their penises, and twisting them into various positions to resemble different things, such as "The Pelican," "The Windsurfer," "The Eiffel Tower," "The Loch Ness Monster" and their signature creation, "The Hamburger." They call it the Art of Genital Origami. This show has played in 35 countries and has been translated into 5 languages. The show is many things: awkward, outrageous, interesting, intriguing, funny, uncomfortable, and certainly unique. To reiterate and to be perfectly clear (because I keep getting questions :) it is full frontal nudity. The penises ARE the puppets. Yes, the guys grab their dicks and put them in positions. This is the show.

The show has received a lot of accolades through the years---primarily, I believe, because of its outrageous nature. Their first show at the 1998 Melbourne International Comedy Festival was received as the "Outright Best Show." I also believe that the curiosity factor plays a huge role. But is it a good show? Well...it's okay. As a show, it is exceedingly under-developed. They miss a lot of opportunities. As a show, there are so many more possibilities with costumes, props, music, and of course the dynamics of the production itself. They never build the show into something greater. The nature of the show proceeds thusly: conversation, manipulation, and presentation...repeat. It is a funny show. It is not a hilarious show. They are missing out on all the big laughs.

I do give huge praise to the two puppeteers for the evening. They have to be a couple of the most confident and self assured men in the city, and it comes across in their performance. They maintain brilliant composure throughout the evening...all while joking, manipulating, and presenting themselves...fully. It is no easy task to build a rapport with an audience while being naked...especially when you occasionally go into the audience. Establishing the relationship was masterfully done and an essential element for this production. It feels odd to say, but in the world of penis manipulation there is a fine line between appropriate and inappropriate, and they were able to flirt with that line, but never did they once cross it.

And the things they did with their poor penises...there was a lot wincing and squirming all night from the men in the audience, and a lot of open-gaped stares from the women. Ultimately, it was both amusing and educational. I don't believe that anyone could anticipate the length that a ball sack could be stretched.

The Erotic Heritage Museum is really the only place in the city that this show could have played, due to the decency laws in the city that govern the range of nudity that can be displayed for various entertainments. The Jewel Box Theater was carved out from a corner of the museum, and I thought that they did a really nice job in the conversion (the seats are pretty uncomfortable, but maybe that could come with the next upgrade.) I would like to see them offer a range of package deals that included both entrance to the museum, as well as the show. And they're certainly missing out on concessions...hot dog sales could be enormous. For me, alcohol would have been a great partner for this production.