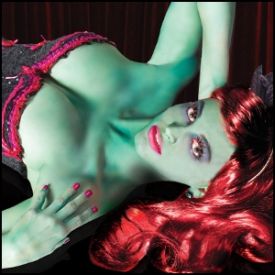 Zombie Burlesque is playing inside the V Theater complex at Planet Hollywood. The show opened about a year ago and was really the only successful original production venture in the Vegas entertainment industry in 2014. It is a classic burlesque show performed by a cast of sexy and talented zombies backed by a seven-piece band of living musicians. It is a good show...somewhat slipping from the greatness it had when it first opened. The trendy and kitschy use of zombies should get people in the door, and the talent should keep people coming back...but things need to be once again tightened up.

Zombie Burlesque takes place in Las Vegas during the Atomic Era, circa 1958. The audience is invited to be among the first living audience members to experience classic burlesque, zany musical numbers and top-notch singing all performed by the sexiest zombies at the hottest, formerly zombie-only, nightclub in town. Two singers, six dancers and a live band round out the old school burlesque show.

What strikes me most about this show is that it is a show that has been themed...the show comes first. It is a show that features talent...the dancers, singers, acts, and musicians. It is a show that works on many levels and transcends the theme...it could have been themed with aliens, robots, vampires, etc; and it would have still worked. I have seen all too often a show that has been created from a theme...all theme, no substance...anyone remember, "Shag with a Twist?" They were so intent on conveying the style that they forgot the basics of doing a show. That is not the case with Zombie Burlesque. It is a show...and a good one, with very clever elements.

That being said, the show has gotten a bit sloppy. Performers have gotten a bit indulgent...they are enjoying their own cleverness and inside jokes so much that they're leaving the audience out in the cold. Bits that may have been cute in rehearsal are now in the performance...even though they may not serve the production. Certainly the show is campy, but as soon as the performer starts playing the camp...then the integrity is lost. This is an hour and fifteen minute production that takes an hour and a half to complete.

All the performers (except the musicians) are zombies...and most of their makeup reflects this...except a couple of the women. Maybe full zombie makeup is too much of a bother, maybe they feel it makes them unattractive, but the performances simply do not work when the performer is not committed to their "zombie-ness."

Another really basic problem...I couldn't understand them...and I checked with the people all around me, and they had no idea what was being said and sung either. And it is not a problem with volume...there is plenty of volume; it is a problem of clarity...either too much reverb, or a bad mix...either way, the first time I saw the show, I understood what was being said... this time I couldn't. The premise and humor heavily rely on understanding the words, and because understanding is a problem, a lot of audience members are missing out on a lot of what made this production a hit in the first place.

The theatre itself has been greatly improved over the course of a year. It is still an awkward space, but it is certainly workable.

It is disappointing to see a show slip from being great show to only being good show...but these are all fixable problems.