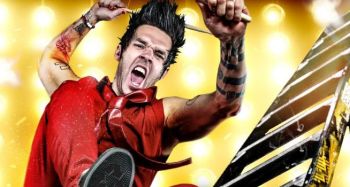 Note: Now playing at Saxe Theater in Planet Hollywood.
Recycled Percussion is playing in the main showroom at the Quad. It is a fun, interactive, high-energy show that gets everyone involved. Upon entering the theater, everyone gets to pick out and "instrument" along with a drumstick and play along with the show... (Granted, all of the instruments are pots, pans, and a collection of other such things.) The showroom does get loud at times when people are just randomly banging away. The show is very family friendly and is great for your teenagers. (Not something that can be said of many other shows on the Strip.)

Formed in 1994 in New Hampshire at a high school talent show, Recycled Percussion's first performance gave birth to the style of music now known as junk rock. Justin Spencer, who has been named the world’s "fastest extreme drummer," along with fellow drummer Ryan Vezina, guitarist Matt Bowman and DJ Jason Davies have averaged more than 250 shows a year since. The band was introduced in living rooms across the country on the hit TV show "America’s Got Talent" on NBC. The group placed third out of more than 100,000 acts and became the first non- singing act to place in the top three in show history. The group has appeared on the cover of USA TODAY, has performed on numerous television shows including the "Today Show," and recently played their biggest show ever by performing on "China's Got Talent." The audience at the outdoor stadium was over 80,000 and the home viewership reached more than 610 million viewers. The band has also performed at the 2010 Latin Grammys, World MMA Awards, NBA and NFL halftime shows, convention general session openers, corporate events, college performances and more.

Just about every aspect of this show is delightful. It moves quickly---sound, movement, and music seem to flow out of this cast. The personalities are obvious and charming, and they make a real connection to the audience.

There is only one aspect of this show that really doesn't seem to belong... While in line awaiting entrance into the showroom, people are asked if they want to be participants in the show. They make it sound fun---working with the cast for a five minute segment onstage. The participation turns out to be one of those basic audience abuse sections that really isn’t funny at all. Laughing at the public embarrassment of another person has lost all of its appeal for me. Every volunteer looked as if they regretted their experience as they left the stage.

Their signature piece, a rhythmic drumming number with ladders, is the finale of the show. This is the piece that everyone has come to see, and it certainly doesn’t disappoint.

Recycled Percussion is a good show that is fun for everyone to watch and to be a part of. As long as the cast sticks to what they do best, then the show is a wonderful experience for the entire audience.