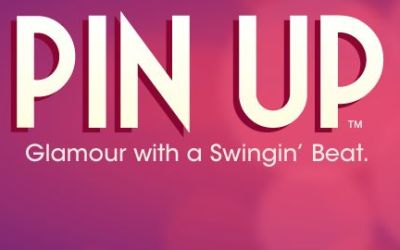 Pin Up is playing in the showroom at the Stratosphere Hotel & Casino. It is a fun dance and musical production that has really turned out to be a top notch show. The show stars Claire Sinclair---the 2011 Playboy Playmate of the Year, and includes a great cast of dancers, a wonderful singer, and a great band. The show is a celebration of the "pin up," and each of the numbers tracks its way through the calendar year. It is well done and a lot of fun.

The show pays tribute to an era of yesteryear in another significant way. This show is produced by the hotel---unheard of in today's market, but such a tremendous and significant step for Las Vegas entertainment, and I hope that other hotels begin to follow suit. The only other hotel funded show in Las Vegas is Jubilee!...the last holdover from the era when all of the shows were funded by the hotels. It is hard to relate what a significant step this is, and thanks go to the Stratosphere for taking that step.

Pin Up is a strong and good production...with a few oddities. One might think that a show about pin ups starring a Playboy Playmate of the Year might have some nudity in it...but it doesn't. One might think that the 21 and over age restriction for the show might point to some racy material...but there isn't any. There is no content in the production that could even be given a rating above PG. The women are sexy, but with no nudity, bad language, or racy material; it could almost be considered family friendly. (There are reports that Sinclair will do a strip tease down to pasties in the future, but I'll have to get back to you on that.)

Claire Sinclair is the star and host of this show. She is a beautiful woman, and she is very personable on stage...she does, however; still need a lot of work on her stage presence, effective speaking, dancing, walking, and acting. She pulls off her role in this production because she has been sufficiently marginalized in the show. It is a smart move on the side of the production team at this stage of the game. I hope that she works on all of her performance and stage attributes. If she could be effectively inserted into additional parts of the show; eventually she could be a major force with which to reckon.

The rest of the cast is magnificent. Anne Martinez, the lead vocalist, handles a bunch of different musical styles with panache and grace, and brings a sultry and sexy flair to all of the songs. The dancers are the hardest working cast members out there with number, after number, after number, and do an incredible job. The only male dancer in the cast, Ryan Kelsey, has such a tremendous presence and skill level that he makes all the other men in the audience wish that they could be him. And finally, the musicians...there is nothing like having musicians. They are great and add all the real dynamics to the show.

There is a challenge number between a tapper and a drummer that doesn't work...not because these people aren't good, but because the musicians keep verbally diminishing the dancer. It takes away from the entire integrity of the number, and there is no communion between the performers at the end of the number.

Additionally, the show is crying out for one kickass acrobat/gymnast. There are several times that a gymnastic or acrobatic skill is showcased, but these are additional skills that the dancers possess rather than being "what they do." The outcome is a fair routine rather than one that could bring us to our feet.

My favorite number is the gun spinning; whip cracking routine...there is nothing better than a good gun spinner. And it is a skill that is not overly seen. I believe that the performers name is Meghan (anyone please correct me if I'm wrong.) She deserves a lot of lauds and praises.

Pin Up is a good show...if it keeps moving in the direction its going; it could be a great show.