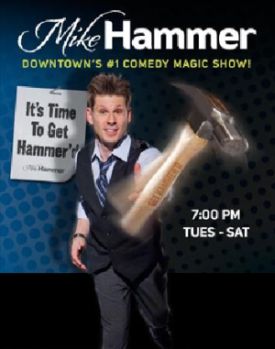 Mike Hammer, with his Comedy Magic show, is playing inside the Canyon Club at the Four Queens Hotel and Casino. The show has been called "The Most Interactive Show of the Year," and certainly the bulk of the audience gets involved in one way or another in the antics of Mike Hammer. The show seems to have equal parts of comedy and magic, and the quick paced show never seems to have a lull or down point. Mike is exceedingly talented and adeptly handles anything that the audience seems to hand him.

In 2010, Mike Hammer was named by Esquire Magazine as one of Las Vegas' "45 under 45," honoring the most successful men, business leaders or executives in the Entertainment Capital of the World. He isn't just an outstanding solo performer.  He is the founding member of Spike and Hammer, Las Vegas most requested comedy magic team which has played to thousands of companies and colleges across the country.

Entertaining from beginning to end, this show is somewhat of a brilliant sleeper. You may not think of Mike Hammer as one of the top headliners in Las Vegas; you may not have even heard of him...but truly, that is a function of PR rather than talent. This show doesn't have a great deal of press and advertising behind it, and it is tucked away at a downtown hotel. But this show is one of the best bargains that you'll find in Las Vegas--- reasonably priced and worth far more in entertainment value.

The illusions that he does are small and delightful---these are not the grand illusions of big magic shows, but instead work very cooperatively with his comedy. The atmosphere that is created in the Canyon Club is very comfortable, and Mike Hammer puts you at ease immediately.

The Canyon Club is a good space for this show. There is a great audience/performer relationship set up from the stage to the seating. This allows for easy access and facilitates the interaction that Hammer initiates. In another space, that separation might not work as well…and the audience involvement and interaction is partly what this show is all about---making a connection.

Interacting with an audience is usually considered one of the toughest things that a performer can do, but Hammer handles it beautifully; and as it so happens, it is the cornerstone of the entire production. Everything is built from there.

Mike Hammer is a very talented performer, and in the grand scheme of Vegas entertainment, he is very underrated. It is difficult for any performer of a small or medium size show in town to get any sort of notoriety. You simply can't compete with the entertainment dollars of the big shows, and often the performers of these other shows are just lost. Mike is worth finding and seeing.

This is a show that is good for children and families (yes, the children need to be over 5, but that is to avoid distraction rather than because of content,) it is simply a delight.