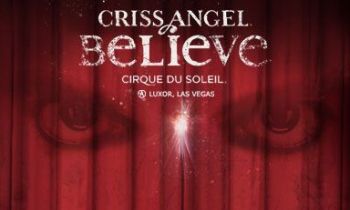 Criss Angel: Believe, with Cirque du Soleil is playing inside the showroom at the Luxor Hotel. This is the long awaited collaboration of two unlikely participants, and the result is something that is interesting, but not truly blended or at ease with each other yet. Right now it feels like a forced partnership, and I wonder if, during any part of the creative process, the two parties looked at each other and thought that maybe this wasn't a good idea.

In all fairness, there have been several Cirque shows that have opened badly, but one of the great things about Cirque is that they never give up on a project and they don't ever stop the creative process...all of the shows eventually get to a point of greatness. "Believe" will get there as well, but it is still quite a way off.

The show opens with Criss Angel and a tribute to "Mindfreak," the show that made him notable in the first place, with a lot of running around, yelling, and video of things that he has done...now all of this could have been done without Cirque. Then there is a gruesome and disturbing accident, and we go into the fantasy section---which is all about Cirque and would have been better without Criss Angel.

Disappointingly, this is probably the worst written and conceived Cirque show. The biggest cop out of all is setting the bulk of it as a "dream sequence"---that is essentially what you do when you can't think of anything else. It all hinges on the belief that Angel is creating this hallucinated world from a staged accident...if you can't make that leap, then the rest of it is completely contrived. It would actually take a really good actor to get the audience to take that leap, and Angel's acting skills are not up to the task. Perhaps instead of doing the "where am I" routine, he could acknowledge the accident and us and take us on this journey...it would effectively eliminate the bad acting and move us forward...but they're not there yet. The show has heavy influence and borrowing from "Alice in Wonderland" and "The Wizard of Oz," complete with the ending sequence right out of the movie.

This is not a magic show, but instead it becomes a magical journey. The attempt is to organically incorporate illusions into the story. At this stage, some of them work and some of them feel very forced. There is no new magic. These are the same tricks that we can see up and down the Strip, but they are redressed to give them a different feel. In this redressing they have also made some good and bad choices. For example, when Angel does the metamorphosis trick (a classic Houdini illusion,) they use smoke for the masking and reveal rather than a cloth...an interesting choice, but smoke often doesn't completely cover, nor does it vanish immediately. It lingers, and while some of the audience sees the trick, others have to wait until the smoke clears, and because of this, it is less magical. Currently there doesn't seem to be an attempt at resolving some of the bigger story gaffs...Angel is sawed in half, taken off stage, and then shows up at his own funeral...but why explain? It doesn't have to make sense. Anything can happen, remember? It's a dream sequence. (Which is also why it is a cop out.)