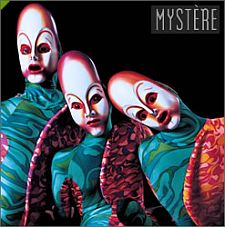 "Mystere," playing inside the theatre at Treasure Island, is one of the best productions in Las Vegas. The show recently celebrated its 6,000th performance, and after more than 10 years, the show has managed to stay in top form. There are moments when the show is awe-inspiring and filled with wonder. It is as amazing as it has always been. It seems that, no matter how many times you see it, there is still always something new to find within this production. The production creates a visual fantasia and shows us that sometimes the impossible is, in fact, possible.

The show is about human potential, and it is certainly gratifying.

Cirque Du Soleil opened its production of "Mystere" in December of 1993 at Treasure Island. Since that time, it has remained a standard by which all other Las Vegas productions are measured. Additionally, because of the success of "Mystere," the way has been paved for additional Cirque productions in Vegas. "O" at Bellagio, "Zumanity" at New York, New York, KA at the MGM Grand, Love at the Mirage, and the future productions at City Center, the Luxor, etc. Cirque Du Soleil is going to be home in Las Vegas for a long time.

There have been some criticisms about the proliferation of all the Cirque shows, but then again, these are some of the best shows in town. What’s so bad about having another production that’s going to be astounding, amazing and fantastic? With the quality and level of entertainment that is being produced by Cirque, we should be proud to see how far this company can go.

Before the beginning of the show, the crowd is entertained by a "clown." It is mostly mild and harmless audience abuse, but it is fun to watch---especially since it is happening to someone else. Just be sure to arrive early. This misguided clown reappears at several different junctions in the show and has the potential to bring an otherwise smooth running production to a grinding halt with his antics...but that’s part of the fun.

At the opening of the show, we are engulfed by lights, sound, music, performers in front of us, behind us, and above us. Pounding drums provide a wake-up call to this new journey upon which we are embarking. We also meet a baby that is trying to make his way in a world filled with strange creatures. With the addition of acrobats, dancers, and musicians, we are shown feats that take us to the edge of human potential.

It is difficult to pick out a favorite part. The show progresses with one amazing act after another. Every act is unique and wonderful in its own right. A man dances and twirls with a cube, and then makes you feel as if you can fly. The pole climbers work with such ease that they make everything look simple. The bungee dancers amaze you as they float and dip their way across and over the audience. You hold your breath as they move their way from one move to the next. The show is enthralling.

The production remains elusive when it comes to a specific interpretation. Those who wish to glean meaning from the show may get very frustrated. There are a lot of elements that are laced together, and throughout this production, that no one interpretation would be satisfactory.

The theatre is wonderful. It is fashioned after a classic Greek amphitheater. The semi-circular seating surrounds an orchestra, or dancing place, with a larger playing space behind it. It is a real theatre with real theatre seats. A very welcome sight in this town where most of the performance spaces are set up as lounges with uncomfortably close tables and chairs. Additionally, the space has great technical support---lifts and lights of every sort and shape that transform the theatre with an effortless look. It is technical wizardry at its best.

There is no doubt that "Mystere" is an amazing production. It deserves all of the praise that it has received and will certainly continue to astonish audiences for many more years to come.