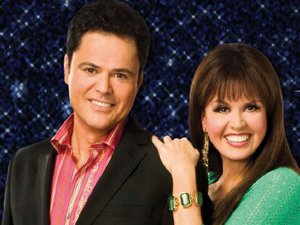 Donny & Marie Osmond are playing in the main showroom at the Flamingo Hotel. What started out as a six-month contract has turned into a five year residency with one extension after another. The show has become a tremendous hit and is well recognized as being one of the best shows in Las Vegas. The pair has proven themselves to be outstanding additions to the Strip, and their show should be enjoyed by everyone.

Both Donny & Marie are top-notch entertainers, they are both strong singers, and they are both good movers. They have been seasoned from a lifetime of performance and have such a comfort and ease on stage that they immediately establish a great rapport with the audience.

Donny & Marie offer a very unique product in our entertainment market. They put a family friendly show. It is classic headlining entertainment that one would have enjoyed on prime time television. And even though they might seem like a bit of an anomaly on the center Strip location, they are actually a welcome sight in an entertainment industry that has a reputation for being overly adult oriented.

The show was good on many levels...the nine-piece band, complete with a horn section, gave the show a tremendous dynamic...there really is nothing like having real musicians backing you up. The troupe of dancers was great. They were strong performers and they had very interesting choreography with which to work...again, they were all dressed as if they were doing a prime-time special on the Family channel, but they were great dancers. The set was flexible and workable, and the lights were a great enhancement. As an addition to everything else, there were a lot of old photos of the Osmond's that took most of us back and made us part of their history.

Donny & Marie grew up in the spotlight, and they both have a tremendous level of self- awareness...awareness of themselves, their age, their history, their relationship, and acknowledgement of both their strengths and weaknesses...they were able to take all of that and make fun of themselves and each other. It made for a delightful time.

"Donny & Marie" put on a great show. It was fun, it was flashy, it brought back memories, and it made me see each of these performers in a new light. The show works on every level, and it is no wonder that they have been extended time and time again. I absolutely recommend this show.