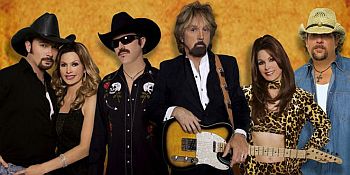 Note: Now playing at Bally's Las Vegas
"Country Superstars" is now playing inside the showroom at the Golden Nugget. The show has created a new format for itself and is probably one of the best versions that I've seen. The biggest change comes with the arrival of Cody Collins (the former lead singer of Lonestar.) It is a new---half impersonator/half headliner show. The first half of the show is all of the impersonators, and then there is Cody. It is an interesting mix of genres, but it does come with its shortcomings.

Impersonator shows can be a tough sell---especially when the stars that are being impersonated are alive, and often play Vegas. Why see a show of impersonators when the real thing is available? Part of it might be the price, and part of it might be the ability to see a wider variety of artists and hear a greater selection of music...additionally, the accessibility and availability is far greater than the "real" thing. Whatever the motivation, Las Vegas is filled impersonator shows around every corner. "Country Superstars" had to find a way to separate itself from the rest of the crowd, which is why they brought in Cody Collins.

Ron Keel and Corrie Sachs seem to be the mainstays of the production. Keel performs as Ronnie Dunn and Sachs as Reba McEntire. Keel's impersonation has always been solid...strong character, good voice, and very low key. Sachs' has done McEntire for years, and at this point, perhaps too many years. She has fallen into the traps of her own profession, and instead of doing the best McEntire that she can do, she is simply doing a caricature of the performer. I'm sure that the funny faces and vocal quirks have gotten good response over the years, but now that seems as if it is all she does.

All of the impersonators in the show come with an impressive list of credits and do their best to entertain the crowd, but for the most part, it seems as if something is missing---whether it's an element of dynamics, a connection with the crowd, or the shortcomings of the room---something is wrong, and the excitement doesn't seem to fill the space. I know that part of the problem is the trap that any impersonator can fall prey to...because the performer is so focused on playing someone else; they sometimes lose the connection with the audience. It is that inner dynamic that made the real stars..."STARS," and if that spirit is intent on looking, sounding, and moving like someone else, then we miss out on that truly special "something."

This is punctuated with the arrival of Cody Collins...as soon as he takes the stage and opens his mouth...we get it immediately. We understand why he is a legitimate recording star and all of the other performers are not. He truly shines in this production. He has both talent and charisma. The unfortunate side to his being wonderful is that he points up the shortcomings of everyone else. Side by side, the impersonators do not come off so well.

The band is absolutely terrific. They play a variety of styles and songs, and handle each one brilliantly. They are a very tight group. There is nothing like a good live band. It adds so much to a production. This show would fail if it weren't for the band.

This show is a tough call...if you are a country fan, then of course you are going to like it. Collins is great. If, however, you are on the fence about the genre...then seeing impersonators are not going to push you to their side.