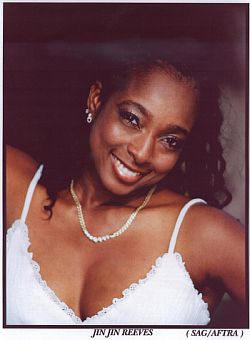 "Hitzville: The Show" is playing inside the V Theater at the Miracle Mile Shops in Planet Hollywood. This production recounts some of the greatest hits from the Motown era. Its upbeat style, fabulous singers, and terrific bands make that show a delight to hear and see. "Hitzville" takes you on a journey through time with the best of Motown, going from town to town, and featuring the music of Tina Turner, The Drifters, Diana Ross, the Temptations, the Four Tops, and many more. The show says that it stars Jin-Jin Reeves, but the fact of the matter is that all of the performers and musicians in this production are stars. Everyone has a featured spot in the show, and everyone has a chance to shine...and they do.

The show used to play in the V2 Theater at the facility, and it's nice to see it move into the "big" room. It is better supported with the lights, show, and staging---giving a better audience/performer relationship than was available in the other theatre.

A congratulatory nod goes out to producer David Saxe as well. His encouragement of live music in most of his productions adds a dynamic that is not found in tracked shows. It is a tradition and a device that is worth keeping. I could not imagine this show without its musicians. The five-piece band adds an enormous amount to the success of this show.

The music of "Hitzville" is legendary. We know every song and can sing along to most of them. Every song delights us and manifests a memory for us. It touches our hearts, our minds, and makes us want to dance. There is something comforting about knowing every song that is being played. The familiarity puts us at ease. We can sit back, relax, and enjoy. We don't really have to think; we just feel and remember.

The show is great in its simplicity. It is just good music from beginning to end.

The show is somewhat segmented with two different casts---one male and one female. So that the progression of the night proceeds with the male group coming out and doing (for example) the Drifters, and then the women do a Diana Ross medley; followed by the men with the Four Tops, etc. I wanted a greater through line in the show...something that tied everything together.

Jin-Jin Reeves is a wonderful performer and has worked with all of the great groups that are out there. She has done film and television. She dances. She does it all. She has a wonderful playfulness that seems to shine through when she is working some of the characteristics of some of the performers to which she pays tribute.

"Hitzville" is a crowd pleaser. With great music, great singers, and great musicians; this show will delight most audiences from beginning to end.