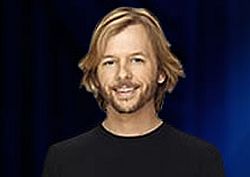 David Spade is playing intermittent dates in the Danny Gans showroom at the Mirage Hotel and Casino. (Check show guide for dates) His trademark sarcasm and wit pervade the evening as he speaks on a number of topics. This style of comedy brings about a great evening of entertainment, and the time flies by. It is great to see him doing standup. It is a change from seeing him on the television and movie screens, and it is certainly a refreshing change.

David Spade has found success as a professional smart ass using his razor sharp sarcasm to make his point. He first made a name for himself as a standup comedian, and spent most of the '80s performing on the comedy club circuit. He joined the cast of Saturday Night Live in 1990 and created several notable characters that became part of our contemporary culture including the highly disinterested airline steward who bids each passenger adieu with a very sardonic "Buh- bye," and the irritating receptionist who greets each huge celebrity with an unknowing "And you are . . . ?" A master of the putdown, Spade's "Hollywood Minute" reporter also took cynical advantage of several tabloid-worthy stars.

Following his departure from SNL after six years, he went into his movie career, most noticeably as the foil to Chris Farley in Tommy Boy and Black Sheep. The teaming ended with Farley's death from a 1997 drug overdose. Spade has appeared in Joe Dirt, Dickie Roberts: Former Child Star, and more recently The Benchwarmers. Television earned him an Emmy nomination as the droll, skirt-chasing secretary Dennis Finch on "Just Shoot Me!" He has also been the commercial spokesman for Sierra Mist soda and Capital One credit cards.

David Wayne Spade was born July 22, 1964 in Birmingham, Michigan. He is the youngest of three sons. His father moved the family to Scottsdale, Arizona, but abandoned them not long afterwards. Spade's mother eventually remarried, but David's stepfather committed suicide in 1981. He went to Arizona State University, and earned a degree in business.

Spade has a natural ease on stage, and even though his manner is very low key, he exudes charm and charisma. It's important for comics to get up on stage and work their wares...some elements are lost when one gets in front of a camera, and comic timing can be lost without practice.

Spade puts of a good show. It is fun and amusing. He doesn't play that many dates, so be sure to check the show guide.