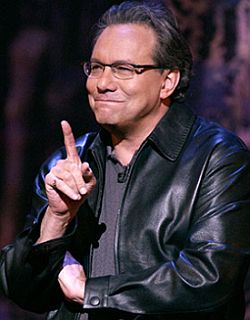 Lewis Black is playing intermittent dates at the Hollywood Theatre inside the MGM Hotel & Casino. Black has been dubbed "America's Foremost Commentator on Everything," and he is best known for his regular appearances on Comedy Central's, "The Daily Show" delivering his "Back in Black" commentary segment, in which he ridicules recent trends and cultural phenomena. His stand-up routine is nothing short of brilliant with much of his commentary coming out of the daily newspapers.

On stage, Black appears to be a deeply frustrated angry man. He is a pissed off Will Rogers that looks at the events and news of the day, and gives us his perspective on the subject--- which is oftentimes, incredibly insightful. He is a man who seems to be approaching his personal limits of sanity while dealing with the absurdities of life and politics. Sarcasm, strong language, shouting, and his trademark angry finger-shaking bring emphasis to his topics of discussion.

Black was born of Jewish descent in Washington, D.C. and raised in Silver Spring, Maryland. He graduated from Springbrook High School in 1966 and was exposed to playwriting as an undergraduate at the University of North Carolina at Chapel Hill. He earned a Masters in Fine Arts at the Yale School of Drama in 1977. Originally, his career was in the theater as a playwright. He has written over forty plays besides serving as the playwright in residence and associate artistic director of a Hell's Kitchen theater bar and restaurant on 42nd Street in New York City from 1981 to 1989. Black's stand-up comedy began as an opening act for the plays as he was also the master of ceremonies. After a management change at the theater, Black left and began working as a comedian as well as finding bit parts in television and films.

A good portion of Lewis' political material is aimed at the notion that simply nothing makes sense. He is a man that is totally at a loss about the society swirling around him. He is just as critical of Republicans as he is about Democrats. There just seems to be disbelief at the combination of thick-headedness and attitude in authoritative figures. He is quoted as saying, "what is the difference between a Democrat and a Republican? A Democrat blows, and a Republican sucks."

The Hollywood Theatre at the MGM is a great place to see Lewis Black. It is a well appointed space that seems to work well for all of the headliners that play there. Black will be back in town to play various dates, so be sure to check the show guide at lvol.com for specific dates and times.