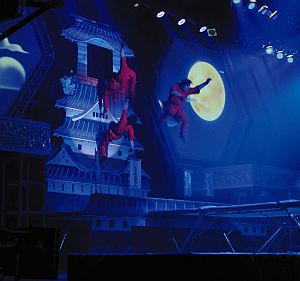 "Matsuri" is back! "Matsuri" is the number one production in Japan, and it has come to Las Vegas and is performing in the showroom at the Imperial Palace. It is one of my favorite shows of all time. It is an amazing production that is filled with athletics, acrobatics, dancing, and Japanese tradition. The most prominent attribute to the production, however, is the pervasive joy that is permeated throughout the theatre. This troupe of high-energy performers does a stellar job at keeping things lively and vibrant.

The production originally started in Japan as a television program called, "Kinniku-banzuke," produced by Ushio Higuchi. The idea of the program was to create a sports variety program that highlighted athletic performances, which were set to music. As it was recreated for the stage, it evolved to include a variety of musical stunts, extreme sports, and comedic routines.

"The show is an energetic, interactive, and memorable musical performance that celebrates the human mind, body, and spirit," says Higuchi. "These athletes and performers accomplish things on stage that most of us can only dream of...but what amazes me is that they can perform these feats because they dared to dream they could, and then make it their reality."

This audio/visual spectacular is propelled by the movement and the music. It has very few words, making it accessible to anyone, and the nature of the production makes it great for the entire family. Young and old alike will enjoy this production.

This show definitely has international appeal. The emphasis is on movement and rhythms that seems to be able to stir something in everyone, and the comedy is both simple and unique.

The show has made several attempts at a Vegas production. It first appeared at the Riviera for a short run, and then it reopened at the Rivera for another short run. It then had a run at the Sahara. This time the show at the Imperial Palace has a cast of about half the size (but the stage seems as full as ever. I really hope that this is a good fit for the show.

Most of all, "Matsuri" is a very 'human' show. It is about the people in the cast, but it is also about us and human ability and nature. The show is filled with joy, and it is impossible to leave the production without a smile on your face.