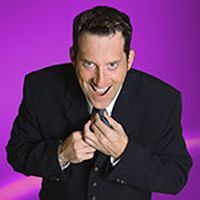 Anthony Cools plays inside the "Anthony Cools Experience" at the Paris Las Vegas. His is the extreme hypnosis show in the city...It is extreme, uncensored, and absolutely outrageous. The show follows a typical hypnosis show format, but it truly is far more excessive than any of the other shows of that ilk in town. The things that he gets people to do are completely shocking. His patter and delivery is slick and well rehearsed, and the show runs exceedingly smoothly.

Normally, I have to give a bit of a disclaimer before beginning a review of a hypnosis show...In general, I hate hypnotist shows. I don't like it when the audience is the entertainment. I don't care for the puppet/master relationship that is set up with these types of shows, and I hate it when audience members are set up to be embarrassed. That being said, I had a great time.

In contradiction to everything that I profess is wrong with hypnosis shows, I laughed uncontrollably---even when it felt totally wrong, I still laughed. The volunteers are on the stage of their own volition, and they are willing participants. So with a caveat emptor in mind, I eased up on some of my notions and enjoyed the show.

Anthony Cools is a masterful showman with charm, panache, and enough roguish charm that makes you like him and accept all that he does with his participants. I like Anthony. He is a hard-working entrepreneur that is always trying to improve and expand his businesses. His theatre has expanded and improved since the last time I saw the show. It was originally a space carved out of a front desk lobby situation...it is now a theatre. Cools other ventures constantly keep him busy and growing. I admire that.

Cools, a Canadian-born showman whose adult-themed performances made him a hot nightclub attraction in cities across America. Cools earned cult-like popularity through his ability to hypnotically persuade audience volunteers to behave outrageously on stage. His subjects eagerly obey his suggestions to play imaginary musical instruments, to engage in dialogue with their own body parts or to make passionate love to furniture. Every show is unique because Cools is never sure what kind of hidden personalities he will extract from the nightly group of amateur performers.

Cools had a lifelong fascination with hypnosis. In college, he was a television and film major. In his early years, he worked as a radio disk jockey and a nightclub manager. He dedicated himself to the study of hypnosis and eventually developed the expertise to help thousands of people overcome behavioral problems. Through videotapes and private sessions he has helped his clients lose weight, stop smoking and overcome life-crippling phobias. In 1994, he became a comedy hypnotist as an experiment to increase business in his own nightclub. His show life quickly out-paced his clinical life.

Cools' does his best to keep the ribald and risqué activities from straying into an X-rated zone, but it is certainly a judgment call as to which side of the fence upon which he lands. He says that his subjects are rarely embarrassed, but I would have to have more proof to believe it. I think that I would be embarrassed if I had dry humped a chair onstage or felt like I was having an orgasm in front of everyone...but that's just me. Everyone seems to have a great time, but I'm still glad that I didn't volunteer.

Anthony Cools has truly done the unimaginable...he has made me enjoy a genre of shows that I normally hate. The production is funny---for all the wrong reasons, mind you, but it was very, very funny.