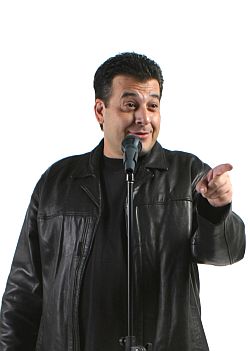 Note: Now playing at the Tommy Wind Theater
Vinnie Favorito is playing inside the showroom at O'Shea's Casino. He is right in the heart of the Strip, but it still takes a bit of looking to find him. Quick-witted and hilarious, Favorito fills the night with non-stop laughter as he plays on current events and preys on the audience. He is a comic that has earned the right to have his own showroom with an open-ended run.

Favorito has been at O'Shea's for two years and has just signed on for another. Prior to that, he had a nice run at the Horseshoe, and he had made a name for himself earlier in Las Vegas while performing at The Improv at Harrah's.

Vinnie puts on a terrific show. His comedy is always pointed and on target, and you can't help laugh at so much of the inappropriate nature of it all. He handles a lot of questionable material, and handles it brilliantly. The first half of his show is set material, but it is fresh and topical. The second half of the show is all improvised with the audience. He has a supremely quick mind and can come up with a funny comment on just about anything. The show is not for the faint of heart. You have to be able laugh with others as well as laugh at yourself.

Favorito began delighting audiences in 1986 and was first noticed nationally as a WZOU 94.5 FM (Top 40) Star Search champion. His diverse appeal has earned him silver screen exposure on various Comedy Central shows, "The Late, Late Show with Craig Kilborn" and the "Best Damn Sports Show Period". He is also known throughout Hollywood as one of the country's top "roasters" for celebrities including Tom Arnold, Jerry Springer and Larry King.

Making his way to the Las Vegas circuit in 1990, Favorito provided comic relief to the masses. He is arguably best known in Vegas for his performances at The Improv comedy club at Harrah's. In Boston, he has served as host of "Boston Chronicle," a magazine television show, and guest radio host on Boston's EAGLE 93.7 FM. Other honors include Favorito's 1998 victory as winner of the renowned San Francisco International Comedy Competition, and recognition from the Boston Herald as one of Boston's Top 10 Comedians.

Favorito's comedy plays on current events and preys on the audience. He seems to have a talent for seeking out and finding the humor within us all. No one is safe in the audience, they are all potential comic fodder for Favorito; and I pity the poor, unsuspecting spectator that attempts to trump him. His repertoire of retorts seems endless. He was once described as a "Don Rickles with venom."