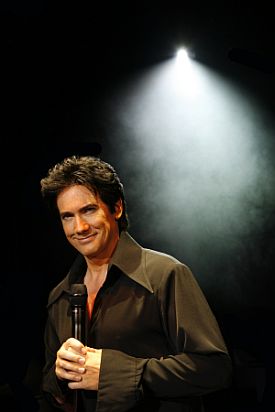 Gordie Brown is playing at the showroom inside the Golden Nugget Casino. His headlining solo act is a fun evening filled with music, comedy, impressions, and a little bit of insanity. The show is a tour de force for his talent and abilities, and the energy that he has to share keeps things moving nicely.

As soon as Brown comes out on stage, his appeal is obvious. He has a lot of charm and charisma, and his on stage persona immediately puts the audience at ease. He quickly builds a strong rapport with the group, and at once, we are on his side.

Brown does an amazing variety and range of impersonations. For the most part, his impressions are good both vocally and physically, but even when the impersonation is not that great, his shear energy makes it worth watching. He manages to bring forth the essential characteristics of each of the people that he chooses to do.

He is a very clever performer, and adds a twist with each of his impressions. Brown always seemed to find interesting alternate lyrics to bring out with each of the songs. This made for a hilarious alternate view of these classic performers that we have grown to cherish, and now saw differently.

Brown's band is excellent. They seem to have the ability to change styles and tunes as easily as Brown changes voices. Without the music, this show would be nothing. Brown is a good performer, but if he didn't have these wonderful musicians backing him, his performance would be severely lacking. It's as if Brown is the flesh and blood of the show, and the musicians are the bones and spine.

Brown has had a long history of performance here in Las Vegas, starting with the Landmark Hotel as the variety act in Melinda: First Lady of Magic. He moved around to several different properties, and then was the opening act for Celine Dion when she went on tour.

He definitely seems to have found a great home at the Golden Nugget. The Golden Nugget is the best downtown venue for entertainment. It is a classic showroom with a lot of history.

Gordie Brown has a great talent, and he puts on a great show. His continued success in this town is inevitable. He deserves it.